Journalist, television presenter and founder of Childline and The Silver Line 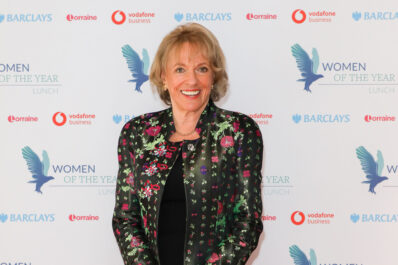 The Women of the Year Lifetime Achievement Award 2021 went to Dame Esther Rantzen DBE. Dame Esther has been on our screens drawing attention to important matters for over three decades, hosting the TV series That’s Life! from 1973 to 1994. In 1986 Dame Esther created Childline, the first national helpline for children in danger or distress, which merged with the NSPCC in 2006 and now has 12 bases around the UK with similar helplines in 150 countries around the world. In 2013 Dame Esther set up The Silver Line, a service to help older people in the UK battling loneliness.  During the pandemic there was a 31% increase in calls to The Silver Line – many were experiencing isolation and loneliness but other calls were from people scared about things associated with the pandemic such as going into hospital alone. There are thought to be around 1.2 million chronically lonely older people across the UK – since its launch the service has received over 2.5 million calls – and The Silver Line now handles 10,500 calls every week from older people across the UK. It relies entirely on voluntary donations and 3,000 volunteer Silver Line Friends making regular weekly Friendship calls to the elderly. It offers three support services: a 24-hour helpline; a befriending service to combat loneliness and a means of empowering those who may be suffering abuse and neglect. In 2019 it became a subsidiary of Age UK, joining forces in the fight against loneliness.

Dame Esther Rantzen said, “Created by Lady Tony Lothian, herself an outstanding achiever who was supportive to other women and enormous fun to know, this is the event of the year. It’s not only greatly enjoyable, every year I am awestruck and inspired by the creativity and courage of the award winners. So I am astonished this year to be awarded the Women of the Year Life-time Achievement Award. I feel incredibly lucky, and I know I owe everything to the opportunities I have been given throughout my life, to the dedicated teams I have worked with, and still do, and to the freedom I as a British woman have been allowed in a world where millions of women have had their freedoms denied or snatched from them. They will be in our hearts and minds at the lunch today, in the hope that they too will have the freedom to achieve, and fulfil their dreams.”